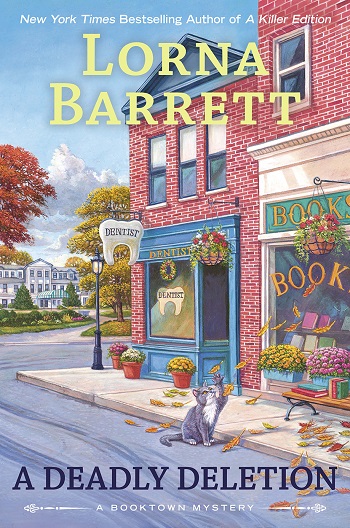 Tricia Miles has just received a second marriage proposal within fifteen minutes. The first was from her friend with benefits, Marshall Cambridge, and the second from her ex-lover, police chief Grant Baker. Tricia’s got some serious thinking to do.

She’s still weighing her options when she hears the sound of an engine roaring down Main Street. It’s a big white pickup truck that aims for and hits Marshall as he’s walking back to his apartment. Tragically, he’s killed, leaving Tricia feeling bereft and guilty. She retreats to her sister, Angelica’s, apartment to wait for Baker to update her on what happened. While there, Tricia takes Angelica’s dog out for a comfort call behind the building, and the same white pickup roars up the alley and just misses hitting Tricia.

Still shaken by that news, Tricia returns to Haven’t Got a Clue and is met by federal marshal Kirby, who tells her that Marshall had been in the Federal Witness Protection Program. Everything Marshall told Tricia was a lie–in particular, that he was a widower. Was his death an act of revenge?

“A DEADLY DELETION is a jaw-dropping whodunit that will leave fans of the long-running Booktown Mystery series in utter shock. And as this is the fifteenth book in the series, I will go out on a ledge and say the best one yet. I have followed Tricia’s adventures from book one, MURDER IS BINDING, and let me tell you, I was completely thrown by the ending in this installment.

“One of the many things I love about this series is the concept of Booktown itself. Is there anywhere more perfect for us bibliophiles to want to live? A town centered around bookshops is perfect in and of itself, but added to that is the cozy, small town New Hampshire setting that makes it of those series that you anxiously await release day so you can catch up with old friends. The supporting characters, Tricia’s sister, her shop employees, and extended family are all so important to this series, and each has their own subplots which makes these books even more enjoyable and engaging. A DEADLY DELETION can be read as a standalone, but I always recommend starting at the beginning to get the full effect of the storytelling talent that Lorna Barrett has perfected with this series.”
–Fresh Fiction

“If you have enjoyed previous cozies in this series, run, don’t walk to get this one. I think it is the most explosive one, the one from which Tricia’s life will never be the same again. I was captivated by this complex mystery and would never have guessed who the real bad guy was. The descriptions of Stoneham, New Hampshire in autumn were so appealing, and each major character was defined well. Tricia, her family, and staff are engaging, a group anyone would be pleased to call her people.”
— Open Book Society

“Ms. Barrett creates an engaging read and carefully plotted mystery while she updates readers with the supporting cast she so carefully develops to support primary characters. The resolution to the murder and mayhem in this novel is entirely unexpected and a complete surprise.”
–Fresh Fiction

“A Deadly Deletion is a hectic and gripping whodunit with chamber of commerce kerfuffle, unpredicted proposals, slagging book sales, tasty thumbprint cookies, a determined dentist, an orderly abode, and a shocking solution.”
–The Avid Reader

“This has become one of our favorite series. We love to follow the adventures of Tricia and Anjelica and see what sort of trouble Trish always gets into.  Loved the fact that Baker finally came to his senses and proposed!  Can’t wait to see where the next installment takes Trish!  Five paws!”
— Cats, Books, and … More Cats

The shop’s door opened, and a heavyset man of about fifty with what looked like dyed brown hair entered. “I’m looking for Tricia Miles.”

Something about the man made Tricia feel uneasy. “That’s me.”

Tricia felt every muscle in her body tense. “What can I do for you?”

“I’d like to have a word with you—in private,” he said, his skeptical gaze taking in Pixie, who that day was wearing a khaki skirt and matching jacket, looking like one of the Andrews Sisters and at any moment about to burst into “Boogie Woogie Bugle Boy.”

“What’s this about?” Mr. Everett asked, moving to step between Tricia and the government agent. He was at least a foot shorter than Kirby, and probably fifty pounds lighter, but Tricia appreciated his protective gesture.

Tricia knew that federal marshals tracked down fugitives. They transported prisoners. They were responsible for protection at federal courts and enforcing the decisions made by those judges. And they were also responsible for the security of witnesses.

A cold fist of dread seemed to clench Tricia’s heart.  Federal marshals were also in charge of the federal Witness Protection Program.

Tricia’s mouth felt dry as she answered, “Of course. My office is on the lower level.” It sounded so much nicer than saying the basement. “If you’ll follow me, please.”

Tricia started for the back of the store with Kirby following in her wake.

“Call me if you need me,” Pixie hollered.

Tricia flipped the light switch and led the marshal down the stairs. She ushered him into her guest chair and turned her own from in front of the desk to face him.

“First of all, I’m very sorry for the loss of your,” he hesitated, “friend.”

“I’ve spoken with Chief Baker of the Stoneham Police Department and he gave me your name.”

She figured as much. “Why are you here, Mr. Kirby?”

Kirby hesitated. “I was the agent in charge of Mr. Cambridge’s case.”

“Was he enrolled in the Witness Protection Program?” Tricia asked. She didn’t have the patience to waste time fencing.

Tricia shook her head. “I read and sell all kinds of mysteries, Mr. Kirby. I’m well aware of what federal marshals do when carrying out their responsibilities. What crime did Marshall—or whatever his real name was—do?”

“Unlike most of the participants in our program, Mr. Cambridge was not a convicted criminal.”

Kirby shook his head. “I’m not at liberty to say.”

“May I assume everything Marshall told me was a lie?” she asked, trying to stay calm.

“I don’t know what he told you, ma’am,” Kirby said matter-of-factly.

“Divorced before he entered the program.”

The terrible yoke of grief became that much lighter with every new revelation. “Was his death an accident?” Tricia asked, dreading the answer.

“We don’t think so,” Kirby said, his voice level.

“You believe the man he helped convict was responsible?”

“More likely a relative or a business associate.”

Tricia nodded, trying to make sense of everything she’d just learned. “What was his real name?”

“So at least one thing about him was true.” His middle name.

“We encourage those under our protection to assume a name they’ll readily answer to.”

Eugene. Marshall would never have struck Tricia as a Eugene. Gene maybe, but not Eugene. None of that mattered anymore. The fact that Kirby had dropped by meant he hadn’t come simply as a courtesy call. “What is it I can do for you, Mr. Kirby?”

He pulled a small notebook and pen from his suit pocket. “Please tell me exactly what you saw last night at the time of the … incident.”

Tricia gave a brief description, trying to keep her emotions in check. Kirby jotted down a few sentences. “What did Chandler tell you about his upcoming plans?”

“That he intended to stay here in Stoneham and take over the local weekly newspaper.”

“Yes, we’ve ascertained that. Anything else?”

Tricia hesitated before answering. “He asked me to marry him.”

Kirby’s gaze dipped. “Yes. A box with an engagement ring was found on the body. I assume you said no.”

“Is it any of your business what I told him?”

His gaze hardened. “I’m investigating a probable murder, ma’am. Everything is relevant.”

“And you suspect me?” she asked aghast. “You must know I was in the company of the Stoneham chief of police when Marshall—er, Eugene—was struck by the pickup.”

“I understand that. But apparently, you were the person closest to him. We’d like to know Chandler’s state of mind at the time of his death.”

Tricia sighed. “I didn’t say no. In fact, I didn’t give him an answer. His proposal was totally unexpected and caught me off guard.”

Kirby nodded. If a thought balloon suddenly appeared over his head—like in the comics—it probably would have sarcastically said, Sure.

Tricia suddenly remembered Ava. “Will you be talking to Marshall’s employee at the Armchair Tourist??”

Poor Ava. Unlike Patti and Ginger, she would be out of a job sooner rather than later. That is, if Angelica didn’t rush in to buy that business, too. She already owned half of the village under her own and Nigela Ricita’s names.

“What will happen to Mar—Eugene’s—remains?”

“His lawyers have been notified of his death. Whatever arrangements he made will be carried out.”

“He led me to believe he was alone in the world. Will the lawyers carry out his final wishes?”

Tricia despised being called ma’am. It made her feel so old. “Will you be in charge of the investigation into Marshall’s death?”

“We’ll do a preliminary investigation, but we’ll likely turn it over to the local jurisdiction. Officially, Mr. Chandler left our protection the moment he died.”

Wow. Talk about cold. But then Marshall had been just another cog in the program’s machinery.

“Is there anything else I can tell you?” she asked.

“If I have more questions, I’ll be in contact.” Kirby rose from his chair and turned to leave.

Kirby paused at the stairs. “I can find my way. Thank you for speaking with me today.”

Tricia merely nodded. She watched him go before turning to collapse into her office chair. Everything Marshall told me was a lie, she thought. But those lies had kept him alive—until the evening before, at least.

Tricia frowned, unsure what to feel. If she’d committed herself to Marshall and then found out everything about him was a sham, she’d have felt shaken to the core. She wasn’t sure she wasn’t already that shaken. But the terrible grief and guilt she felt had been muted by Kirby’s revelations.