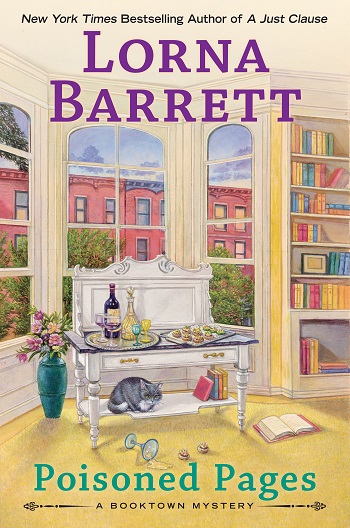 “With characters that are well developed and a very appealing storyline, I highly recommend any cozy mystery readers pick up POISONED PAGES by Lorna Barrett. You will love Tricia and her sister Angelica along with the rest of the town people in Stoneham. No wonder this is a growing series with these energetic characters.”
— Fresh Fiction

“Poisoned Pages is a gripping and entertaining mystery that will surely delight mystery fans. It has vibrant characters and a suspenseful plot.”
— The Washington Book Review

“This is a novel of secrets and lies. That the mistruths and deceptions have been going on between loved ones is tragic, and yet understandable as they are the ones whom we never want to disappoint. There is a little commentary on the state of women in politics, especially when the campaign turns truly ugly. Tricia has a rather impressive record of vengeful exes, but the one who may finally be her best match proves to be the most surprising of all. Stoneham is a town every book lover would dream of calling home, but it is still populated by very human tragedies and struggles. What I love so much about this series is how both Tricia and Angelica have grown as characters, building a bond between them that is supportive and yet still vulnerable to insecurities. The Booktown of New Hampshire may have its share of flawed villains and nosy gossipers, but overshadowing all is the genial good humor and warmth of these delightful Stoneham characters.”
— Kings River Life Magazine

“One of my favorite things about the Booktown Mystery series is the character development. Main characters grow and learn and never lose their capacity to surprise, even as the supporting cast rotates in and out of their lives in good ways and bad. Poisoned Pages is an especially strong entry in the series, showing how far Tricia and Angelica Miles have come since the beginning of their adventures together.”
— The Criminal Element

“Poisoned Pages is a fabulous addition to this entertaining series. You can read it as a standalone, but this series is so good, I would suggest reading all 12 of them. The setting is perfect, especially if you are an avid reader. The characters run the gamut, from odd to downright fabulous. These pages are anything, but poisoned. The characters and storyline jump off the page and into your imagination. Author Lorna Barrett has not let up or rested on the laurels of this great cozy series. Number 12 is even better than the last one. I cannot wait for number 13. If you enjoy fun, heartwarming, intriguing cozies, pick this one up!”
— Open Book Society

“The mysteries and twists in this story are spectacular. What is revealed will pleasantly shock and amaze longtime fans of the series and leave you with the most cozy of feelings.”
— A Cup of Tea and a Cozy Mystery

“It was so much fun to traipse around town each step of the way with Tricia. I was completely gobsmacked when all was revealed.”
— Escape with Dollycas

Lorna Barrett “does a great job in setting this mystery up with plenty of suspects, sprinkled with clues, and a few surprising twists and turns that enhanced this story. The pacing was on par and the tone was comfortable. As always, it was a joy to see the other supporting characters, Mr. Everett and Pixie, in this engaging and entertaining tale. An enjoyable read and I look forward to the next exploits of Tricia and her friends.”
— Dru’s Musings

“How many does this make?” asked Grant Baker, Stoneham’s chief of police and Tricia’s former boyfriend, staring at the sheet-covered corpse still lying on her living room floor.

Baker turned to one of his officers. “Have you spoken to all the witnesses?”

“No, Chief. There were at least twenty or thirty people at the party.”

“Do you think you could have helped a man suffering from anaphylactic shock?”

“Angelica was a hero—or rather a heroine,” Ginny said emphatically. “She desperately tried to save him.”

Angelica sat on one of the upholstered chairs clutching a wineglass. She’d had several since her ordeal and Tricia had made up her mind to cut her off if she asked for another refill.

“You didn’t answer my question,” Baker reminded her.

“Why would I invite you?”

“Because I thought we were friends.”

Their friendship, like their failed relationship, had ended several years before. And, besides, Baker now had a lady companion. Was Tricia supposed to have invited her as well?

“So what likely caused the man’s death?” Baker asked the room at large.

“Obviously an allergic reaction to something he ingested,” Angelica said, sounding weary.

“Who made the food?” Baker asked.

“Since when do you cook?”

“Since none of your business.” She didn’t like his tone; the fact that it irked her made her dislike her reciprocal timbre even more.

Baker looked back to the shrouded body. “So you poisoned the poor guy.”

“Well, he’s dead.” Baker walked around the body. “What’s your relationship with the deceased?”

“I had none. I never met the man until he walked through my door a couple of hours ago. He was Frannie Armstrong’s date.”

“In my bedroom, lying down. His death was a terrible shock.”

“A stuffed mushroom,” Angelica volunteered. “It was the last tray of them. I walked around the room offering them to everyone.”

“And nobody else got sick?”

She shrugged. “It’s a pretty standard recipe. I got it out of Angelica’s first cookbook.”

“A national bestseller,” Angelica piped up.

Baker scowled, ignoring her. “Can you let me have it? I’ll give it to the medical examiner and he can test the stomach contents. We’ll try to contact the deceased’s doctor to see what his allergies may have been.”

That seemed reasonable. “Do you want me to scan it right now?”

“We can just rip it from the book.”

Baker started at her tone.

“I consider it sacrilege to desecrate a book in that manner.”

“Then get it to me by morning, will you?”

Tricia nodded and glanced in the direction of the body. “Will my visitor be leaving soon?”

“In good time,” Baker answered, which was no answer at all.

And what about Frannie up in Tricia’s bedroom? Would she be so disconsolate that she’d want to stay the night? Tricia certainly hoped not, but neither could she kick the poor woman out.

“Are there any mushrooms left?” Baker asked Angelica.

She shook her head. “No. The dead guy—sorry, I don’t know his name—took the last one.”

Baker frowned, then shook his head. “Then it sounds pretty open and shut. The guy just had an allergic reaction.”

Did he actually sound disappointed? A man was dead. A person who had lived a life, loved family and friends, and come into Tricia’s home a stranger, would be leaving in a body bag. She felt terrible about that. If only he had mentioned his food allergies, she would have been able to dissuade him from eating the mushrooms. Wasn’t it the obligation of a person with severe—potentially fatal—allergies to do?

Was she trying to talk herself out of the guilt she felt? Maybe. But she did feel terrible that a guest had eaten something fatal while in her home. Meanwhile, the police technicians went to work in the kitchen.

“What are you doing?” Tricia demanded.

“But they’re going through my cupboards and fridge—they’re taking my staples and my serving dishes!”

“You’ll get them back…eventually. It’s just a precaution in case things aren’t what they seem.”

“What do you mean?” Tricia demanded.

GET YOUR COPY NOW!