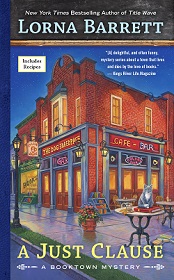 Tricia Miles, mystery bookstore owner and amateur sleuth, is in for a surprise when her ne’er-do-well father, John, comes to town—and promptly becomes a prime suspect in the murder of a woman with her own scandalous past. Even Tricia’s faith in the old man is shaken when the Stoneham police break the news that her father is a known con man who has done jail time.

But what about bestselling thriller author Steven Richardson? Is it a coincidence that he arrived for a book signing just before the crime or that the victim was found with a signed copy of his latest bestseller?

From merlot to murder, Tricia is determined to clear the family name before another body shows up and ruins Stoneham’s first—and highly anticipated—wine and jazz festival.

“Set in Stoneham, N.H., a town that rivals Hay-on-Wye as a destination for book lovers, Barrett’s delightful 11th Booktown mystery (after 2016’s Title Wave) opens at a signing party for thriller writer Steven Richardson at Haven’t Got a Clue, a bookstore owned by the intelligent and inquisitive Tricia Miles. The event is marred by the surprise arrival of Tricia’s ne’er-do-well father, John Miles, and the slap in the face he receives from Carol Talbot, a recent widow and Tricia’s rival in the village darts competition. Shortly after closing the shop, Tricia and her sister, Angelica, owner of the Booked for Lunch café, find Carol dead; an autographed copy of Steven’s book is nearby. It doesn’t take long for Grant Baker, chief of the Stoneham PD and Tricia’s former flame, to suspect John of the murder. With wit and verve, Barrett smoothly blends the story lines involving Tricia’s dysfunctional family with her investigations into the death of Carol and of another seemingly upstanding member of the community.”
–Publishers Weekly

“Author Lorna Barrett has always delivered fun mysteries with characters that are so vibrant they practically jump off the page. And with this latest Booktown Mystery, she continues to deliver just that.”
–Suspense Magazine

“Tricia explores family and small town dynamics in this installment. “A Just Clause” is a welcome addition to the Booktown Mystery series and will amuse fans of cozy mysteries.”
–The Virginian-Pilot

“Mystery bookstore owner Tricia Miles is thrilled to have bestselling thriller author Steven Richardson signing books at her store, but when her wayward father shows up, things get a little strange. Someone heckles Richardson from the crowd, and then Carol Talbot, a local woman with a mysterious past, slaps Tricia’s father and the author in the face. Tricia is not sure what to make of these events. Later, when she’s leaving the store, she stumbles upon Carol’s dead body with a signed copy of Richardson’s book nearby. Who killed Carol Talbot? Was it Richardson? The authorities believe Tricia’s unscrupulous father may be involved, but John Miles is a hard person to track down. Can Tricia and her sister, Angelica, unravel the secrets in Carol’s life and clear their father’s name? Or will a determined killer silence Tricia before she gets a chance?

“The entrepreneurial Mils sisters are back in the latest Booktown mystery. This is a strong addition to the series with an engaging mystery centered on a victim with a very dark past. The book-loving small town of Stoneham provides a great backdrop, and Tricia and her sister, Angelica, create an effective crime-solving duo. Solid writing and tight plotting move the mystery forward without revealing the killer too soon, while family dynamics add a second layer of drama as Tricia and Angelica deal with their badly behaving parents. This cozy combines all the right ingredients; a nasty crime, shady suspects, family squabbles, good cooking, and lots of books.”
–RT Book Reviews

“The story flows smoothly and ties into each plot and suspect moment perfectly to deliver a delightful mystery. “
–Bibliophile Reviews

“Renovations, author signing, bridal shower, wayward father and murder, are all part and parcel of the madness and mayhem that storms the Stoneham village, in this the 11th Booktown mystery. An enjoyable story, with a closer look at the Miles family dynamics.  In this well written and plotted mystery, where Tricia goes head-to-head with a killer.’
–Murder Mystery & More…

“If you enjoy a tight mystery, great characters and a pleasant setting, A Just Clause is for you. Add in the family strife and you have a best seller.”
—Open Book Society

“A cleverly plotted mystery, fast paced with heartwarming characters and heart-breaking drama that had me crying.”
–A Cozy Girl Reads and Writes

“Hard to put down. A fast-paced book that that left me a bit breathless. Add to that a satisfying conclusion, and some tasty recipes, you’ve got a cozy mystery you won’t soon forget.”
–Lisa K’s Book Reviews

Baker looked decidedly unhappy. He opened the book to the title page once more. Richardson had signed the book, but only with his name—it hadn’t been personalized. “At these signings,” he began, “doesn’t the author usually write more than just their name?”

Tricia shrugged. “It depends on the author. Many times customers will buy a book and read it, then give it as a gift. Also, when it comes to the secondary market, a personalized book isn’t worth as much as one with only a signature. These books are first editions. They’re always worth more than those from additional print runs.”

Tricia bristled. “If you don’t want to know the facts about publishing, don’t ask.”

“Your tone was dismissive.”

Baker opened his mouth to reply, then seemed to think better of it. “Never mind.”

“Chief,” Angelica said, her own tone mirroring Tricia’s pique, “when can we leave?”

“When I’m satisfied you’ve told me everything I need to know.”

Angelica’s gaze hardened. “We walked up the street, saw the book, and then found Carol. There’s not much more to tell.”

“I’ll be the one to determine that,” he said, then slammed the book shut and stepped away from the patrol car.

Angelica stuck out her tongue at his back.

“Because you dumped him.”

“I didn’t dump him,” Tricia said emphatically. “I chose to no longer go out with someone who wasn’t ever likely to make a commitment.”

“And now it seems you feel the same way.”

“Then why are you so prickly when it comes to dating Steven Richardson?”

“I’m not prickly. I am going to lunch with him tomorrow, although as far as I’m concerned it’s definitely not a date.”

“Well what would you call it, then?”

“You’re going to lunch with him?” Baker asked.

When had he returned? Had he been eavesdropping?

“Yes, tomorrow. I’m assuming you’ll want to speak with him. He’s staying at the Sheer Comfort Inn, at least for tonight. He said he was going there straight after the signing. He said he had other business in the village tomorrow morning, too—talking to Russ Smith.” The owner and editor of the Stoneham Weekly News.

“Thanks. I’ll be sure to track him down.”

“And now can we leave?” Angelica asked, sounding just a little desperate.

“Yes, you can go. Although I may have more questions for you at a later time.”

“You know where to find us,” Tricia said, and eased her legs out of the backseat. Baker gave her a hand to get out, but then turned away, apparently uninterested in helping Angelica. Tricia opened her umbrella and then stepped forward to give her sister a hand. Baker’s indiscretion had not gone unnoticed.

“There’s one cop who won’t be getting a donation in his name to the policeman’s benevolence fund,” Angelica groused as she tottered to stand on her stilettos. 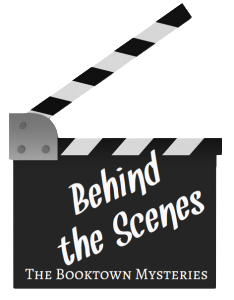 Ever wonder what some of the other Booktown residents think about what’s going on in their lives while Tricia and Angelica solve crimes?

Pixie Poe has her own adventures, too. And you can read about it.  Just click this link!