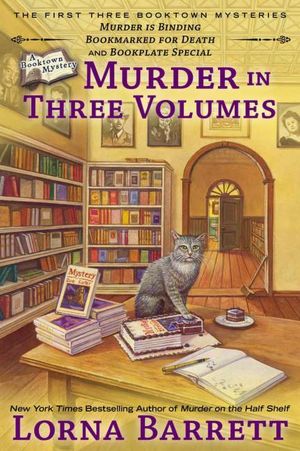 Murder In Three Volumes: The first three books in the Booktown Mystery series in one bargain-priced trade paperback.

Murder is Binding: When she opened her mystery bookstore, city slicker Tricia Miles met friendly competition. But when she finds Doris Gleason killed by a carving knife, the atmosphere seems more cutthroat than cordial. Someone wanted to get their hands on Doris’ rare cookbook–and the locals think that someone is Tricia.

Bookmarked for Death: To celebrate her bookstore’s anniversary, Tricia hosts a book signing for bestselling author Zoe Carter. But the event takes a terrible turn when the author is found dead in the washroom. With both police and reporters demanding the real story, Tricia will have to take matters into her own hands and read between the lines.

Bookplate Special: After weeks of putting up with her uninvited college roommate Pammy Fredricks, Tricia finally gets fed up and kicks her out. But when Pammy is later found dead in the trash cart, Tricia will need to dive in head-first if she wants to solve the case.